China’s stock market has fallen over 30% in the past few weeks and wiped out roughly $3.5 trillion in wealth – or about 33% of China’s GDP. Our direct equity exposure to China is roughly 1.5%, so we don’t see reason for panic at this time. In fact, any related volatility could be good for long-term investors since it provides rebalancing opportunities.

Sharp stock market declines in U.S. stock markets would typically signal recession, but that isn’t necessarily the case in China where the stock market gains were largely unrelated to economic fundamentals. Instead market gains were driven by explosive growth in margin buying. According to The Economist, margin financing peaked at about 12% of the value of all freely traded shares on the market and 3.5% of China’s GDP – one of the highest proportions in global equity market history.

It’s also worth noting that the Shanghai and Shenzhen indices are still up 90% and 92%%, respectively in the last 12 months as shown in the chart below. 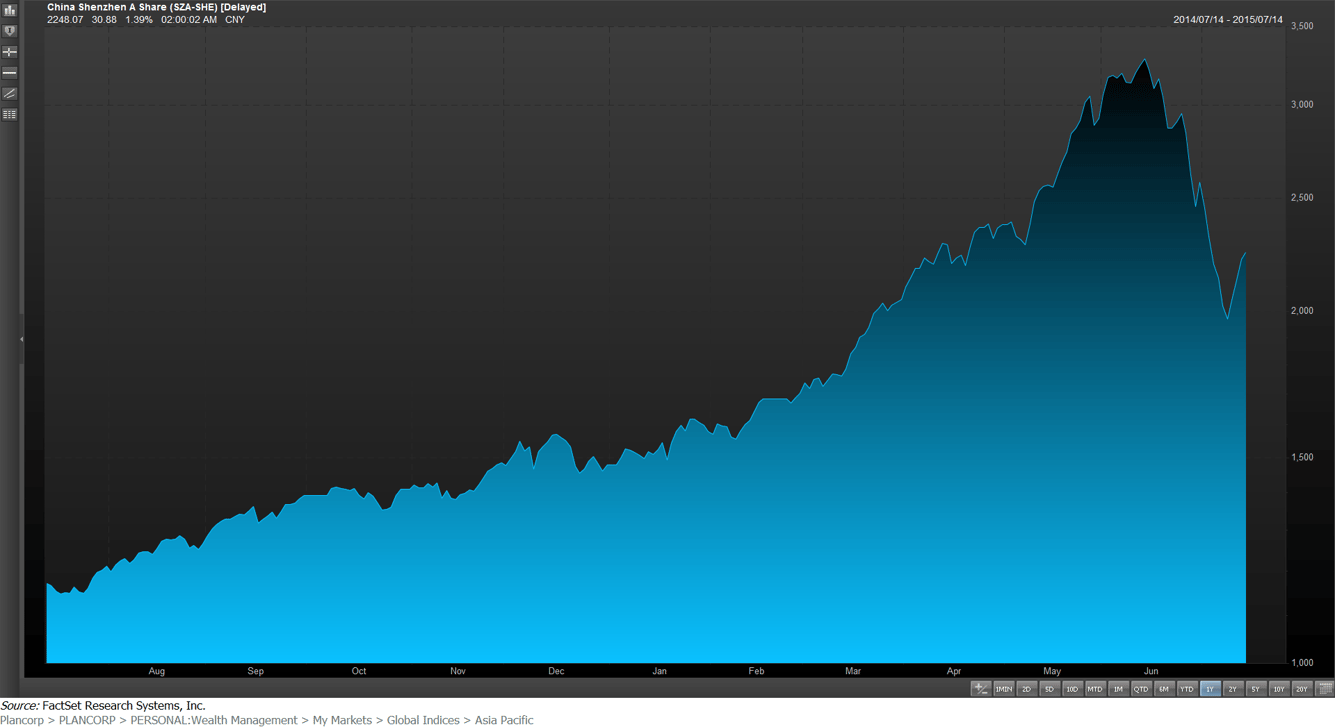 The Communist Party and People’s Bank of China (PBoC) have responded with a myriad of actions in response to the selling. It is no surprise they would cut interest rates and reduce bank reserve requirements, but they have also taken a number of steps that show both mistrust and misunderstanding of market forces. A few such actions include multi-day trading suspensions on a large percentage of locally traded shares, state-funded purchases of ETFs, banning of short-sales, banning shareholders with greater than 5% stakes from selling for six months, etc.

Suspending trading on a large percentage of stocks has historically been counterproductive as it simply creates pent up selling and larger declines when trading resumes. Using state investment funds to buy ETFs and prop up stocks, if successful, would simply further inflate bubble-like market valuations. Banning short-sales removes a source of buying since short sellers are typically the first to buy during a crash to close out existing positions and put a floor under the market. Limiting large shareholders from selling discourages future investment from important sources since it can’t rust that China’s stock market is truly a market.

Despite the disappointing and panicky policy response from Chinese officials, there is reason to believe the damage won’t affect U.S. investors all that much. U.S. investors might expect continued strength in the U.S. Dollar, which is good in the long-term but can weigh on corporate earnings in the short-term.

The probability of global financial contagion is also unlikely because of China’s closed capital account and the limited connection of China’s banks to their stock market. Our concern would be higher, however, if there were signs of a liquidity squeeze or significant currency fluctuations, but that isn’t the case right now.

That said, there is a higher probability of economic fallout for commodity-driven, emerging market countries that rely on Chinese demand. Emerging markets account for about half of global growth, so they do have potential to significantly impact global growth.

It was only two years ago that China’s Communist Party pleasantly surprised the world with its intention of letting markets play a bigger role in its economy. Although there had been some gradual steps made towards a more market-driven economy, we are disappointed to see Chinese officials taking actions in response to the stock market crash intended to “control” markets. As such, we see the biggest damage resulting from recent events being to the trust we can have in China’s pro-market reforms.

If you’re ready to start making smart decisions with your money and build your wealth, take a brief financial wellness assessment, and learn in just 9 questions your biggest areas of opportunities you should be focusing on in your finances. 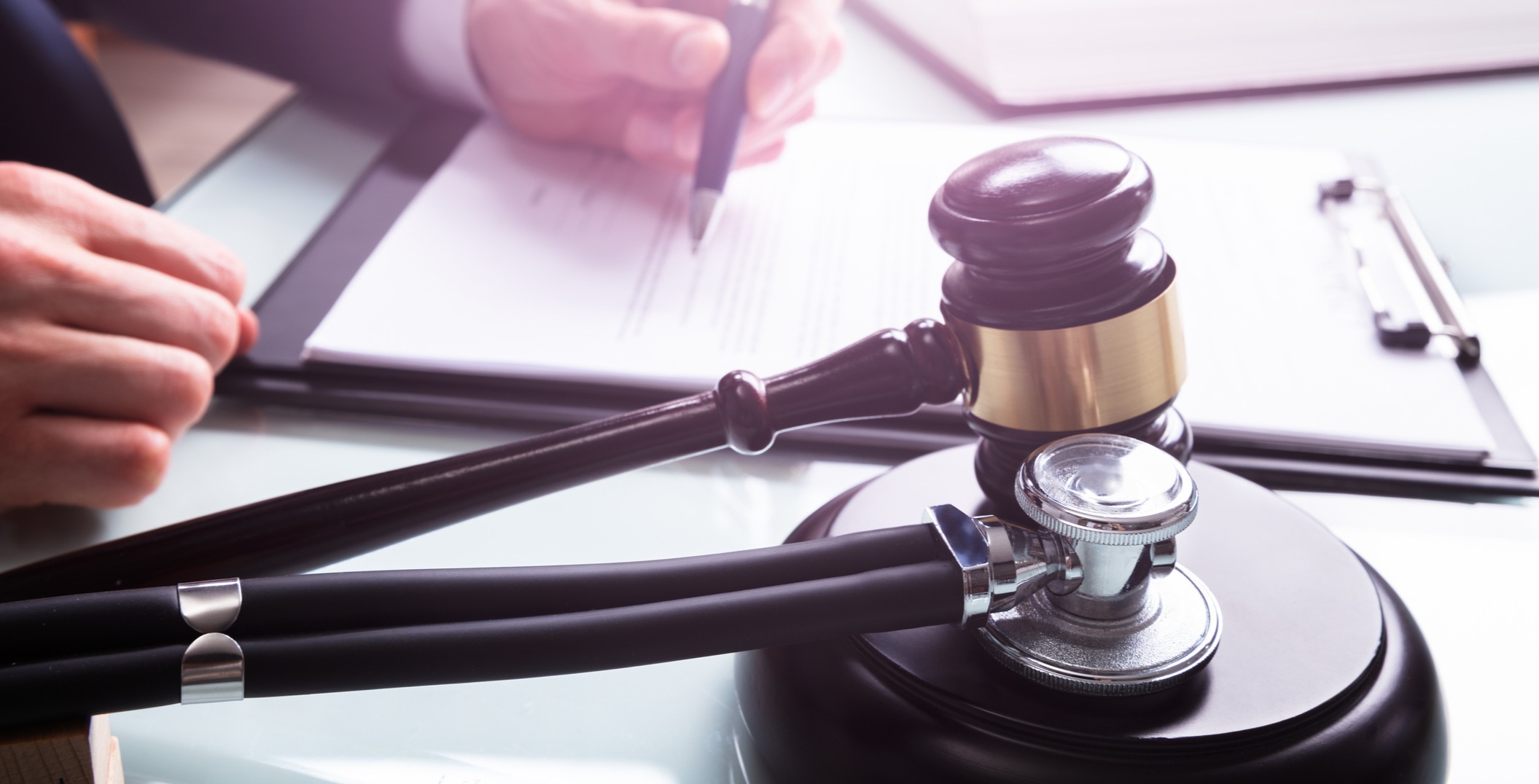 As we all learn to live with the impact the coronavirus is having on our daily lives, recent legislation and relief from the federal government seeks to alleviate the financial impact of COVID-19..

Will the Coronavirus Impact Your Portfolio?

Global stock markets have fallen significantly  in response to the spread of the coronavirus. While market losses of this magnitude are not uncommon, the speed at which the losses have occurred are a.